Horses have been the back bone of human society for thousands of years. We have conquered countries, discovered new lands, made trade, and etc by means of horses. They were the most commonly used transportation of any kind in daily life until 100 years ago when cars entered into our modern life. Of course, foundation of New York City and Central Park were when horses were still important. City plan and Park plan were designed according to the traffic of horse and carriages. For example, the transverse paths of Central Park were originally designed for horse and carriages, and today they are used by motor vehicles. Like those paths, the horse and carriages are still in use. However, today they are only nostalgic figures of the city. They still serve human, this time to give experience of nostalgia and romantics, not to conquer new lands.

The 843 acres of oasis in the heart of the city is the home for almost 20000 trees from 174 different species. In the foreground, there is London Plane which is the favorite of Robert Moses who planted that tree all over the city. Its leaves are the symbol of many park departments. Pink oak and Yoshino Cherry are some of the other common trees of Central Park. During the spring season, south of the The Lake turns pink as if those cheery trees put on their princess dresses. Central Park houses one of the last and largest strands of American Elms in North America. They are located on the sides of the most famous path of the park, The Literary Mall. In addition to its diversity of trees, there are also thousands of species of flowers in the park. Conservatory Garden and Shakespeare Garden are the best places to observe those flowers.

Have you heard that the movies which have scenes shot in the Central Park have more chances to be nominee/winner of Best Picture awards? It is not hard to believe it considering spectacular tones of greens and other colors. Central Park hosts diversity of trees and flowers which provides us harmony of colors in every season. Central Park is definitely an urban oasis which provides feast for our sight. Either in spring when trees bloom their most colorful flowers or in autumn when warmest colors spread all over the park, make sure you take a walk
through the park with your camera.

Home of 29 statues, 843 acres Central Park can be considered an open air museum. You are welcomed by its war monuments on south corners of the park. The most famous path, The Literary Mall has its name from British authors and poets’ sculptures are located on the sides. This path takes you to the most magnificent statue of the park, to the Bethesda Fountain where the Angel welcomes you. Aside from those, you can see historical faces, figures of natures in many different locations in the park. If you want to see the oldest man made monument in the North America, you should walk up to the north, behind Metropolitan Museum. There stands Cleopatra’s Needle- Obelisk which is over 3000 years old.

Most people think that Central Park is at its most beautiful in autumn. The leaves turn into a light show of gold, brown and shades of red. Shortened amount of daylight and colder temperatures cause leaves to change color. So as a general rule, beginning of October and continuing into early November, fall colors cover Central Park. During this season, park and its colorful paths become attraction centers for nature lovers and photographers. Thanks to its
diversity of trees, park provides contrast combination of colors in almost every path and creates perfect scenes. This is why many people from amateurs to professionals grab their cameras and capture these amazing scenes.

Although Central Park is a man made park, it became part of nature and one of the most important stops for Migration Route. Now it is home both to native bird species and exotic birds that pass through during their migration. Some of the native birds are Red Cardinal, Red Tail Hawk, European Starling, etc. You can observe them in most of the Park. If you want to see migrating birds, we recommend you to visit the Rumble, the Reservoir and the Pond which are quiet and perfect places for bird watching. You can get to see loons, ducks, and even egrets. Make sure you have your binoculars with you to make better observations.

All prices are per carriage NOT PER PERSON 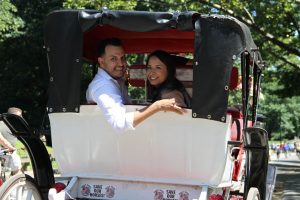 RIGHT AFTER BOOKING YOUR CARRIAGE RIDE, WE WILL SEND YOU A FOLLOW UP EMAIL WITH DETAILED INSTRUCTIONS ON WHERE TO GO AND HOW TO FIND YOUR DRIVER. THE E-MAIL CONFIRMATION WILL ALSO INCLUDE YOUR DRIVER’S NAME AND CELL PHONE NUMBER IN CASE IF YOU NEED TO REACH HIM OR HER